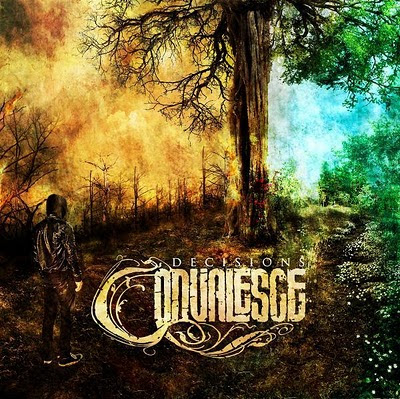 When bands are just starting out, often times they will play a style already well-entrenched into the current music fan's consciousness because they want to be noticed.  Sometimes, it's because they simply like the style that's currently popular.  Other times it's simply because that's what they have learned to play and are just trying to do the best they can with what they know while they are developing their style.  The bands that are smart about their early releases wait until they've done some developing of their sound so they can do something that's at least partially original or different so as to stand out from the crowd a bit and to be a bit more memorable from the get-go.  Convalesce is a relatively new band and does just that.
While highly percussive metalcore is nothing new, that style doesn't usually combine crushing heaviness, melody to spare, and that the percussive elements are primary electronic in nature, i.e. high-speed drum rolls or distorted noises that remind one of highly percussive industrial music.  This element is a key part of the Convalesce sound, at least as it pertains to this EP.  The primary hook here is not the "brootal" breakdowns that some metalcore bands are known for, but rather, the interesting way they weave these electronic percussive elements into their sound, which separates them from the average metalcore band.  That's not to say they don't have plenty of breakdown action for the fan looking for that element, because they do, but they strike a nice balance between crushing breakdowns, melodic passages, fast spots with plenty of double-bass drumming, and slower parts that show the bands penchant for layered production and intertwining guitar lines.  This reminds me of a studied version of Kingston Falls, in some ways, though without the overt sense of humor found on that band's debut full-length.


Guitar sound is great overall, with a nice heavy tone during the breakdowns and lower riffing, and clarity enough during the slower sections or more melodic bits that you can tell what's going on without having to turn it way up or listen over and over to figure out what's being played.  As with much extreme music, bass guitar isn't overly distinguishable in the mix, but provides that nice thump in the backdrop here and there, and serves its purpose by serving the songs.  Drumming is well done, with nice transitions between fast sections and various rolls and cymbal works to transition to slower sections or breakdowns.  Breakdown drumming is fairly non-descript, the usual cymbal sound over some thumping double-bass and occasional snare work. Vocals are more than the usual monotonic fare, with high and low-pitched growls/screams in the mix, sometimes with interplay between the two that has a bit of a "call and response" feel to it.


Lyrics are fairly straightforward and understandable, some quite bold in their proclamation of faith, others a bit more personal, written from the perspective of someone struggling with their faith or expressing humility because they know they are fallen.  The strongest track here is the opener, "Enemies", wisely put at the front of the CD to grab listeners and pull them in.  The rest of the tracks are no slouch, to be sure, but "Enemies" is definitely the centerpiece here.  "Unrested" is a strong closer with good melodic elements, a good anthemic lyric, and a fairly thunderous breakdown 2/3 of the way through, followed by a melodic line that helps bring the EP down and to a close.


One of the strengths of this release is also a weakness - the songs all kind of run together.  It's a strength from the standpoint that it doesn't let up, so if you're looking for intensity and non-stop action in your music (ADD, anyone?), this will do it for you.  However, that also works against the songs and the EP because unless you're paying attention to the album and listening intently, it all runs together so much that you might forget there are individual tracks or songs until the EP is done.  This may have been by design, seeing as how there are barely any transitions between songs, so I can't criticize too much, but it seems like with a style as compact and dense as this, a little "breathing room" is a good idea on occasion.  "Efileno" ("Onelife" backwards, perhaps?) appears to try and serve this purpose, but it, too, seems to fade out right into "Shelter" with no real respite moment.


On the plus side, there are moments during the fast sections where I'm reminded of Afterimage - that's a good thing.  They have created a melodic, yet intense style mixing metal and hardcore with great aplomb, so if Convalesce can perhaps increase the divide between the melodic sections and the more heavy, brutal bits, they can have an even more varied and interesting sound overall.  Ultimately, the way this EP is put together with the songs in the set and the intensity presented in this fashion works well.  It's just long enough and has just enough variation to let you know what the band is all about and give you a hint of what they're capable of, without too much left-field experimentation.  I would recommend before the band finishes recording their full-length (which they are purportedly doing as of this writing) that they expand their musical palette enough to make even stronger, more interesting songs.  And I'd say they need to explore and expand the electronic percussive elements even more, because that is the major element that really separates them from the pack.  Otherwise, for 6 bucks, this is a solid contender for your musical dollar.  Recommended.