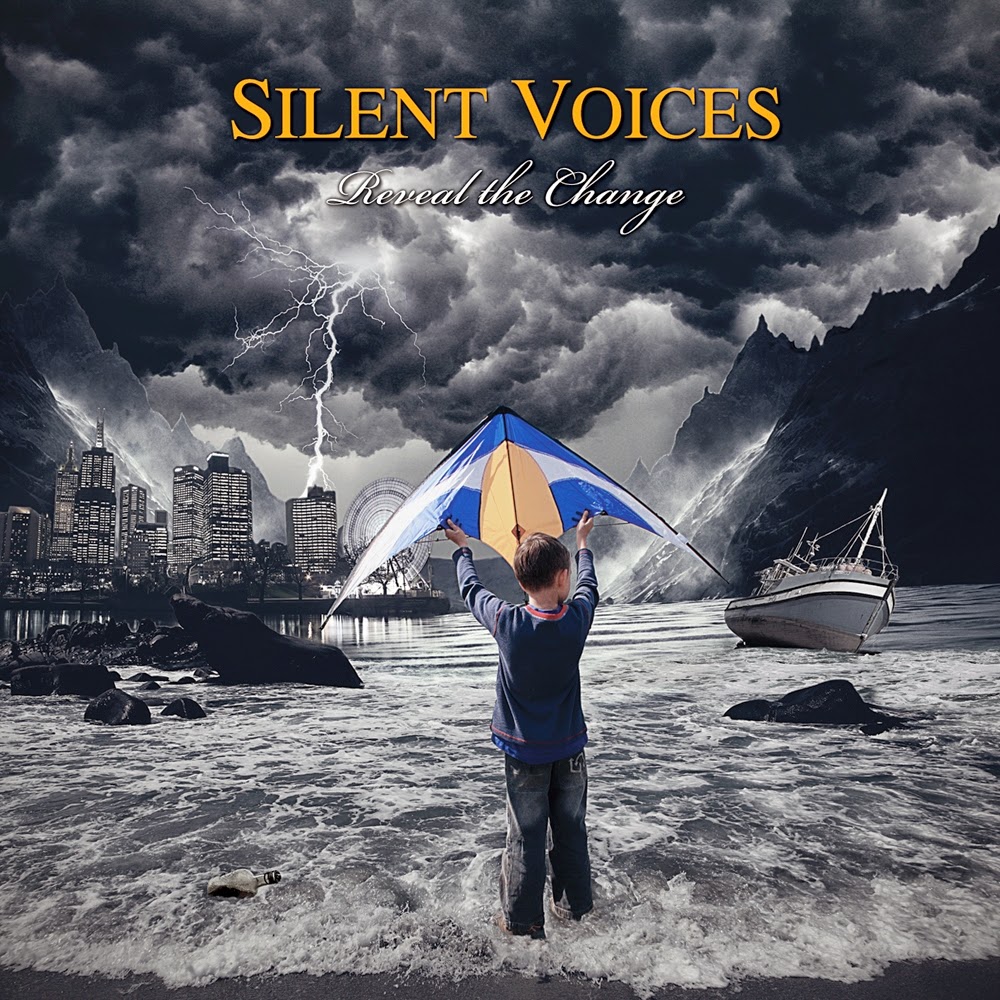 There are many fields of music that are overcrowded, due to years of a particular style or genre gaining popularity and then seeing a glut of bands enter the market playing that same style.  Some fans can't get enough of a certain style or genre, and will buy up nearly everything of that style they can get their hands on.  But aside from that small, core group of fans, bands that enter crowded markets really need to do something to separate themselves from the other groups of that genre to really stand out and make an impact.  That, or they need to combine familiar elements in a unique or interesting way that warrants more than a cursory listen.  To my ears, Silent Voices is doing the latter, with positive effect.

Being unfamiliar with Silent Voices prior to hearing this record, I wasn't sure what to expect, other than some vaguely progressive metal.  In fact, based on the cover art alone, I figured it would be a middle-of-the-road combination of progressive hard rock with a few solos littered about, and just enough grit in the guitar to call it metal.  I was pleasantly surprised, then, that I was only right to an extent of roughly 20%.  Yes, there is some material here that touches on the progressive hard rock spectrum, but I would argue that the overwhelming majority of stuff here is squarely on the metal side of the fence, and the other touches give the sound a bit of an expansive feel beyond the basic tenets of the sound & framework.  How they mix in the various elements of their sound is what gives the album validity.

The instruments on this album are all well produced and have decent separation w/in the sound.  Guitars sound good overall, and have plenty of weight with the lower chords, so riffing is often fairly heavy sounding.  I would assume the guitars are overdubbed in many places, given that this is a one-guitar band courtesy of Timo Kauppinen.  I like the guitar sound and how it shifts seamlessly between the heavier, low-end riffing and the higher scale runs and solos.  Not all guitar tones can move from one to the other without one sounding weak, or giving up some level of heaviness for clarity, so I think this is a good compromise.  I like how as a soloist, Timo swings back and forth effortlessly between highly melodic playing and absolute shredding.  It provides another nice contrast in the sound.  Bass guitar has a nice meaty feel to it, with a lot of low-end and providing not only the necessary thump under the guitar, but also having enough definition in the mix to be a vital part of what's going on.  Bass playing by Pasi Kauppinen is more than solid, and is a good example of how bass can be done right in metal so it's not buried in the mix, but up front enough to really do its job fully.  Henrik Klingenberg provides the keyboard work for the band, and I consider it quite superb.  He exists in that space between the tasteful Kevin Moore style, and the more all-out style of someone like Jordan Rudess.  He can help keep the melody buoyant when necessary, and go nuts with runs, solos, and effects when the song calls for it.  Drumming by original skinsman Jukka-Pekka Koivisto (apparently no longer with the band) is well done and has some nice juxtaposition within some of the songs between fast, double-bass propelled rhythms, and more syncopated, thought-out pieces.  Here's hoping newcomer Jani Hurula does the material justice in the live setting.

Vocally, the album is a mix of folks following the departure of original vocalist Michael Henneken.  In the vocal slot, there is Mats Levén, Tony Kakko (Sonata Arctica), Mike Vescera (Obsession), and Mike DiMeo, along with newcomer Teemu Koskela (who is apparently now a full member).  There's plenty of variety, and the range of voices work well over the course of the album without sounding too disjointed.  I'd be curious to hear how Teemu pulls this stuff off in a live setting, though with Pasi and Henrik likely dedicated most of their time to Sonata Arctica, who knows how much this stuff will get played live.  Specific to the album, however, everyone sounds pretty on-point from a vocal perspective.  I think the vocalists that were chosen for each song were also chosen wisely, because the songs all sound as though they fit the vocalist singing in that track.

One thing I like here is that while the band is clearly influenced by Dream Theater, they're not aping the sound.  To me, it sounds like a power metal-influenced version of what might be the meeting point between the overly complex progressive metal sound of Dream Theater, and the more subdued, lightly progressive sound of, say, Orphan Project.  Both bands are progressive in their own way, but at different extremes in the genre.  Silent Voices exist somewhere in the middle, and it works well for them.  The songs aren't overly memorable, which is a bit of a detriment, but they're not throw-away filler, either.  They do well enough to keep your attention while they're playing, but you won't have these tracks running through your head for weeks after you listen to them.  They're solid compositions that play to the band's strengths, but don't quite reach the level of stronger songwriting that would propel the album to instant classic status.  To sum up: Silent Voices doesn't bring anything new to the table, but they certainly do what they do well enough to justify checking them out at this point.  I can't speak for their back catalog, but this album is recommended to prog and power metal fans who enjoy both styles and enjoy the middle ground between the two. 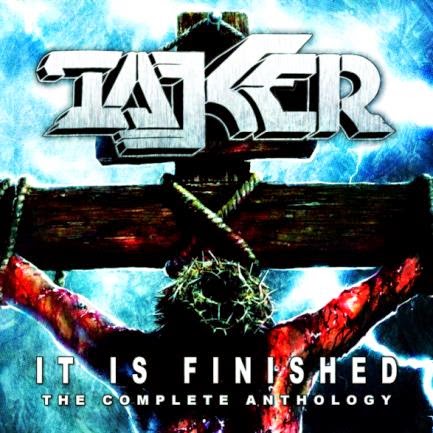 As a music fan, and a metal fan, I love to dig into the history of bands and find out where they came from.  I enjoy hearing early demo material from well-known bands, because it's often indicative of whether or not the band's musical prowess or abilities are their own, or whether their early records needed a lot of "studio magic" to make them sound good.  It's also interesting to hear demo material from bands that never quite got to that place where they got a record deal, so all that is available is studio demos, live recordings, basement tapes, etc.  Either way, an interesting historical perspective.

In the case of white metal band Taker, the latter is the case.  Taker never quite got off the ground, and as a result, all we have are demo recordings to understand where they were at.  Originating in Virginia, this band never got a record deal, and officially only 2 demo recordings exist with any level of distribution.  Thankfully, we have Roxx Productions to dig up recordings like these and make them more widely available to the underground music enthusiast like myself.  Not all recordings like this are going to be at a level of quality that warrants repeated listens, but thankfully, Taker is at least an interesting enough case to be worth checking out.

Taker plays the traditional American style of melodic, 1980's heavy metal sound.  There's a bit of NWOBHM influence here and there, with some fast riffing in songs like "He Is The Light" or "Living By Faith", and big, anthemic choruses that try and get a hook stuck in your head that you'll be singing long after the song is done playing.  As this is a collection of demo material, the quality varies from song to song, especially because much of this is likely tape transfers, so there is a bit lost in the analog-to-digital conversion.  In addition, there are a couple tracks where some damage to the tape(s) was apparent, as there are spots where the song sounds garbled or cuts out briefly.  This is to be expected from archival releases like this, but it's unfortunate that a better quality or less-played copy wasn't available for use.  Still, all things considered, it sounds pretty decent, and is in some ways a step up from some of the previous archive stuff Roxx did early on (like Eternal Ryte's demo material).

As expected with demo material, not everything here sounds fantastic, especially the first 4 or 5 tracks from the band's 1st demo and rehearsal tapes.  The guitars are crunchy and distorted enough, even on those tracks, so they get the job done, and you can tell the players have talent and have clearly rehearsed the material, because it's generally well-executed.  Things pick up near the middle of the CD when you get to the tracks that the band did for an Image Records session.  I could see Taker fitting well on the Image roster alongside Zion and Dreamer, but it never quite happened.  The recording quality steps up quite a bit from that point forward, and it helps give the material a bit more weight and presence.  You can also hear the consistency in performance between the early versions of "Open Your Heart" and "He Is The Light" between the 2 recordings as well.  Bass guitar is present more on the later tracks, and though standard for the music, sounds good given the time frame of the recordings.  Drumming is powerful and solid, and there are a few spots (especially in the re-record of "Yesterday, Today and Forever") where some studio wizardry gives the drums a bit of extra flair.

Lyrically, being from the 1980's, white metal, and following in the Barren/Neon Cross vein, you know what you're going to get here.  Unapologetic expression of love for and faith in Jesus Christ are the bread and butter here, and for the most part, it works well, except when things get a bit clumsy, like "The Measure" or "Look Into His Eyes".  But then metal lyrics from that era aren't known for being highly poetic, so this should be no surprise.  Vocally, Kevin Potter sticks out to me as the weak point of the band.  He can scream and hit higher notes, but there are times when I feel like he's just a bit flat, and other times when he dips into a-melodic territory in places where it doesn't make sense.  He just doesn't quite hit all the rights notes when it counts, which is something that might have been able to have been ironed out with more rehearsal, more studio time to get the right take, etc.  It's not a huge detriment, given that this is demo material, but it does detract somewhat from the songs.

Ultimately, this is going to be a release that is mostly of interest to hobbyists like myself who are interested in the history of "Christian metal".  If you're looking for the next Barren Cross, you won't find it here, but this is mostly a good listen from start to finish, minus a few embarrassing lyrical and vocal bits, and the fact that about a third of the material is repeated on the CD more than once.  The songs aren't overly memorable, though I did find myself humming the chorus of "Open Your Heart" a few times during the course of listening to this CD for the purposes of review.  This stuff would never have set the world on fire, but it does show a solid band that, with a little more practice and time, could have made a bigger impact.  Recommended for the collector and enthusiast.