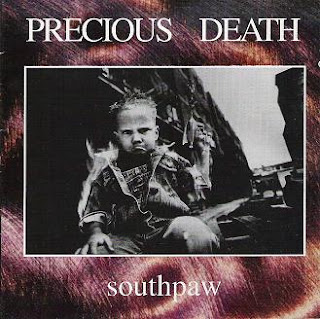 Precious Death was one of those interesting bands that were at once before, and after, their time. By that, I mean that they were embracing that funk-metal hybrid that had come & gone a couple years earlier with bands like Atom Seed, Mindfunk, Living Colour, and I Mother Earth. Most bands erroneously categorized as funk metal were in fact more alternative rock than metal, and though their music contained elements of heavy metal, it was not the dominant element. The aforementioned bands were probably the most "metal" of those associated with the genre. The Christian music market only had one band widely recognized as funk metal, and indeed were associated more w/ the alt rock scene, though their music was heavy enough to be considered metal at that time. That was Dig Hay Zoose. Of course, this band came out about the time Red Hot Chili Peppers and other groups were moving away from the style, & by DHZ's 2nd album Magentamantalovetree came out, the "scene" had all but dried up. The only noteworthy band in that scene from a Christian music standpoint was Hot Pink Turtle, though it's been debated whether they're "metal" enough to be considered part of the same scene & not the alternative rock offshoot of that scene.

Enter Precious Death. After the band's demo (Our Stinkin' Demo) came out in 1991 (the same year as DHZ's 1st album), they regrouped & released their 1st album, Southpaw, in 1993. Now, that was the year DHZ's 2nd album was released. However, this album took a less "metal" approach & was firmly rooted in alt rock as well as the funk leanings of the 1st album. As other bands were abandoning the scene, Precious Death stepped in. The other interesting thing about Precious Death is that their style also incorporates thrash metal (in a somewhat subdued setting), as well as a fairly modern variety of American power metal. Other than the more modern elements, everything the band was doing was on the downturn. Why did they have such an impact, then? I believe that it's because they were stylistically unique in the scene, as well as having elements in their sound that ended up influencing the "nu-metal" scene a few years later. In that sense, they were before their time.

Getting to the music itself, this is an interesting hybrid of mid-paced thrash ala Exodus' "Force of Habit" though a tad less heavy, the modern American power metal stylings of latter-day Anthrax (think "Sound of White Noise" but slightly less heavy), and the funk-metal sounds of bands of the scene, though decidedly more metal than most examples. The title track opens the album with a quiet, clean-guitar intro that blows into a slow, chunky riff. Nothing reeks of funk right away. An interesting picked riff during the verse then recalls the chunky riff again during the chorus. Vocalist Chris Scott has some nice overdubbed vocal harmonies here, including the sung "southpaw" during the chorus. The guitar "solo" here is minimalistic, but works well, serving the song rather than showboating. The bridge speeds things up a bit and has a bit more drum groove w/ some nice cowbell incorporation. Nothing at this point elucidates "funk". Where's the funk?

The answer to that would be "Shine", the 2nd track. The song intros with a drum flourish, and decidedly funk bass, as well as a clean-guitar scratch that recalls funk & disco. The harmonized vocal from Chris is nice, and after a verse of funky bass & guitar scratching comes the heavier chorus with more pronounced drumming. Minor guitar soloing occurs to let you know this is still a metal band, but the funk is brought down in this song. Parts of the scratchy guitar remind of DHZ's work. The clean-guitar bridge 2/3 of the way through is unique & fits the song well. Then a nice melodic solo kicks in. Multiple runs of the chorus close the song in fine form. Track 3 "Hello" doesn't immediately engender thoughts of funk with its clean guitar intro & decidedly rock bassline, or it's heavier underlying riff. Neither does the chunky pre-chorus or the heavy chorus. Not every song has to drip with "tha funk" to be an influence. The bass guitar still shows hints of funk, even if their not pronounced. The solo work in this song is interesting as well. "No-Can-Do" opens with a drum line reminiscent of Spinal Tap's "Big Bottom" (probably not intentional), and a double-tracked guitar line that is slightly eerie. A large riff comes in to complement Chris' vocals & thundering drums in the slow/heavy verse parts. The songs speeds up about 1/4 through, even incorporating a near blast-beat. Never forgetting melody, the riff becomes choppier with Chris' vocals providing the melodic element. Group yells of "No-can-do" accent as well. The solo here serves the song again, providing enough guitar solo for metal heads, but keeping the accessibility high. The slower riff after the solo has that Metallica "black album" feel to it, then a bluesier solo kicks in. After the bluesy part, a more standard fast thrashy solo picks up. "Strange To Me" has more of a defined funk aspect, with funky bass & drums that accent the rhythmic side of funk. Also, the guitar incorporates more of a scratchy sound, albeit this time with more distortion. This song has a great solo! "Talk About the Weather" is one of my favorites with it's fun vibe, finger snaps intro, and bluesy feel. Chris' improvised vocals in the intro also add a nice touch. The main riff has tons of groove, and the song as a whole is dripping with it. Also, more cowbell! There's a nice breakdown in the song about 2/3 in that just adds a bit of atmosphere before the blistering solo. "King of Siam" starts with an awesome super-fast roto-tom intro that I wish there were more of, followed by a nice chunky riff. The verses seem a little too minor chord at times, though I think that was the point (dissonance). The layered vocals here can get a bit overwhelming, at times slipping into post-Voivodian anti-melody. However, they work well in the song. "Force Fed" is a bit thrashier, sounding something like Beg To Differ-era Prong at times (sorry, pun intended). "One Day To Live" is a mostly acoustic ballad. A decent cap on the album, though a tad throw-away compared w/ the rest of the material.

"Southpaw" is generally considered by Precious Death fans to be their best album. Many fans balked at the 2nd album, "If You Must", even though it offered quality songwriting, better production, and a bit more variety in the mix. I am of the opinion that while Southpaw is more consistent, the 2nd album is just as good. Either way, this gem is a classic in the Christian metal scene, & probably the only album of its kind of true funk/thrash/metal that truly graced the Christian music scene. 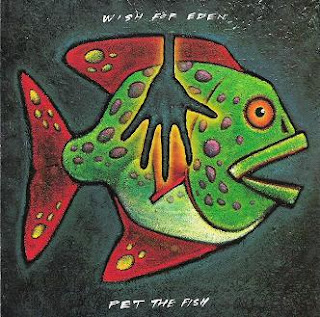 Wish For Eden is the inaugural release from Tooth and Nail Records, a CD that would prove both highly important, and slightly controversial. No one could have predicted the impact T&N would have on the Christian music world, not even Brandon Ebel himself. Of course, this CD was the humble first release of the label that could, a far cry from the current sounds being marketed today. No, this post-hardcore gem was ripe & ready, even if it was a couple years behind the curve.

The album doesn't come roaring out of the starting gate; rather, a brief feedback intro barely prepares the listener for the driving riff that "Questions" uses to suck the listener in. Unlike many of the metal bands that faded into obscurity in the late 80's/early 90's, complexity of the riff was not the order of the day here. A groove-laden, driving riff was what these guys were cooking, and it was tasty. The song moves between ebb & flow, with droning versus, groovy choruses, and a dissonant, ethereal bridge that has just enough guitar feedback to keep it interesting. The song swells at the end with more fast-paced riffing & drum work until the abrupt ending. "Ocean" starts with another groove-laden riff; simple, but effective. The vocals have an echo & effect on them that gives them a haunting feel. Lyrically, the song is very basic; I'm not sure I've quite gleaned the meaning yet, even after all these years. "Don't Know" opens with a clean guitar riff, then screams into another groove-based riff backed by solid drumming. The bass lines in these songs pretty much all serve the songs & don't do anything too dramatic, but that's the way some music sounds best. "U Could" opens with some guitar squealing, and yet another groovy riff, along with some decent drum build-up. The vocals in these songs all move from melodic gruff singing to a more shouted vocal & back again. "Me" opens with guitar feedback & a lead-off bass line. Once the song kicks in, another groovy riff takes hold. "Fade" also opens with a low-end bass line & guitar feedback. The closing title track is the only aberration here; it ends the album on a much lighter note, with less droning guitar, sounding more like a grunge rock ballad (in that good Pearl Jam way) than the rest of the material.

The thing that makes this album work is not how different it is; on the contrary, it's how different it's not. This is not highly original; indeed, this sounds like a slightly less heavy, slightly more melodic version of Helmet. Let that not be a deterrent, however. Underneath the hood of this well-oiled machine is a set of solid, if samey songs, all having their place on the record, & all containing the deliciously obtuse lyrics that many post-grunge bands did back at that time. What makes this record work is that it is the first time since the early Blonde Vinyl records releases that someone was releasing music that was out of the mainstream. Some might argue that Helmet flirted w/ the mainstream due to the success of the single "Unsung" from their Meantime album. Indeed, the band had some success with that song, with a video on MTV & rock radio briefly lauding it. Bands like Helmet don't cater to the mainstream, and reviewers who praised Meantime hated the follow-up album, Betty, despite it being as good (if not better) an album as Meantime. Wish For Eden make a slightly less heavy record, which could appeal to the fan of heavier grunge or post-hardcore, but certainly not to the mainstream rock fan, or even the standard grunge fan, except perhaps those into the more abrasive works of Nirvana or other bands who walked on the harder side of the "alternative" rock movement.

No, this album was destined for the cutout bin before its time. This is not because it's not a good record; no, this was simply a matter of the band being caught in a stylistic movement that was pronounced dead on arrival. Unfortunately, it means that the band never stood a chance except with audiences in the Christian market looking for a positive alternative to the post-punk sounds of Helmet, Snapcase, or Fugazi. Where those bands may have lacked the positivity of a band like Wish For Eden, an important niche was fulfilled. Whether the album stands the test of time has yet to be determined; however, it's cultural relevance cannot be disputed.