Got some new music recently thanks to frequent listener Jeremiah - thanks for the new tunes, bro!  I also scored an original copy of the debut Oil EP featuring former Dark Angel vocalist Ron Rinehart, so I'll be playing a song from that in the show tonight!  Tune in at 9 PM EST and listen in via http://www.sanctusgladius.com !

Don't forget to visit http://www.sanctusgladius.com during the show to login for station chat (you can sign in with your Twitter or Facebook account!) and chat with me and other listeners during the show!
Posted by MetalFRO at 6:09 PM No comments:

No giveaways tonight, but I have a lot of varied music in playlist for you this evening, so tune in at 9 PM EST and listen in via http://www.sanctusgladius.com !

Don't forget to visit http://www.sanctusgladius.com during the show to login for station chat (you can sign in with your Twitter or Facebook account!) and chat with me and other listeners during the show!
Posted by MetalFRO at 5:46 PM No comments:


More new additions to my vinyl music collection!
Posted by MetalFRO at 8:06 PM No comments:

Sorry about being incommunicado last week - I came down with a nasty case of Pneumonia and was pretty much down for 3 or 4 days!  However, I have bounced back and am feeling better, which means The Gamut continues!  I have a fairly diverse playlist for you this evening, so tune in at 9 PM EST and listen in via http://www.sanctusgladius.com !

Don't forget to visit http://www.sanctusgladius.com during the show to login for station chat (you can sign in with your Twitter or Facebook account!) and chat with me and other listeners during the show!
Posted by MetalFRO at 7:51 AM No comments:

Much Japanese anime and manga that dwells in the fictional world requires a certain "suspension of disbelief" to enjoy.  I mean, it's easy to get into something like Star Wars, where the lines between good and evil are easily drawn, and it becomes second nature to learn to quickly dislike the "bad guys" of the piece.  Though more complex, it's also easy to enjoy Star Trek, because of the overarching themes of freedom, exploration, learning, and the betterment of mankind.  Japanese animated features and series, however, often blur those lines, drawing from a more "Hollywood from the 1970's" sort of melange, eschewing the traditional good vs evil sort of mentality for something more intertwined.  That's not to say there aren't defined "good" and defined "evil" sort of characters, but this medium explores a more layered approach, showing that while the "good guys" are indeed good, they often have their own demons to fight, along with those they may have to slay in the physical realm.

So why is it, then, that we in America tend to want to drag story and plot lines out as far as we can for the sake of character development, when in Japan, anime series can be as short as a half-season (12 or 13 episodes, sometimes less) to tell complex, convoluted, and intertwining tales like Tokko?  I'm not sure I'll ever understand that, especially when most anime adaptations of manga are usually re-interpretations of the manga, rather than an accurate retelling of events.  It's odd that many of these manga series would be so shortened in order to make them into anime series, when lengthening the series by a few episodes would usually be enough to make the anime more faithful to the manga.  Chobits is one example of an anime that is mostly faithful to the source manga, despite a few liberties here and there.  But other than excluding some plot elements, the essentials of the story remain the same, and the story is finished out without too many changes being made in translation.

In any event, Tokko is the story of a young cop, Inspector Ronmaru Shindo.  Shindo and his younger sister Saya just go from the police academy/training to actually getting assigned duties.  We find out very quickly that the Shindo siblings suffered a great tragedy when their entire apartment complex in Machida was massacred by an unknown murderous fiend, or possibly several of them.  As the plot unfolds, we learn that these murderers are actually monsters known as "phantoms", and that guns can't kill them.  They can only be killed by members of an elite special police force known as Tokko.  Tokko is the "2nd division" of the "Special Mobile Investigation Section", and Ronmaru is assigned as an Investigator in the 1st division.  It is later revealed that the phantoms came to earth from across the dimensions due to the actions of ages-old alchemists who summoned devils for the purpose of gaining power, only to have the "Box of Dirge" they used to summon them shattered into 108 pieces, each of which became a part of one of the 108 greater phantoms (who can summon lesser phantoms for the purpose of killing and eating humans).  Confused yet? 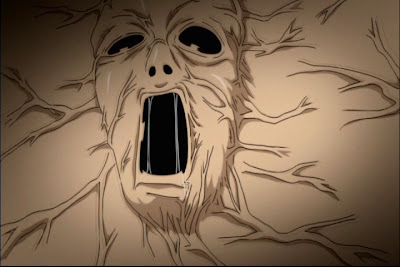 I'm just a lowly phantom, spare me!
So this story line isn't quite as confusing as my short description has made it out to be, but it definitely takes some time to wrap your head around it as you're watching.  In many ways, the plot of the phantoms serves to provide the horror and gore elements for the series.  As you can imagine, with members of Tokko slashing away at phantoms with their swords, phantom bodies are sliced in half and blood sprays everywhere, ala OneChanbara or other live-action Japanese gore films.  In addition to the main storyline, there are several character-based subplots that bring you to the knowledge that all Tokko members are survivors of the Machida massacre, and have phantoms contained within themselves.  These people have had their phantoms "activated" but have been able to maintain control of their humanity and harness the power of the phantoms in order to be able to kill them.  With the death of each greater phantom brings a piece of the Box of Dirge, and Tokko works to try and dispatch all the phantoms and re-assemble this box so the gateway to the other dimension can be closed and things be put back to normal.

Again, I'm probably not doing a very good job of explaining the story, and it's better when you see it yourself anyway.  It's an interesting story, if somewhat disjointed, and it helps propel the somewhat rushed character development.  With all the subplots going on alongside the main theme, as well as the bits of fanservice here and there, you'd think this thing would be a mess and fall apart, but somehow it all works in a weird sort of way.  That is, right up until the very end.  Not to spoil the fun, but just know that the end of the anime leaves a lot of questions unanswered.  Keep in mind as well, here in the US this is rated as TV-MA and they mean it.  The police officers are all pretty "colorful" with their dialogue, and there's plenty enough gore and violence to warrant an R rating if it had been in the theater.  Add some of the adult themes, and you have an animated short series that is definitely not for children.  But then if you're familiar with popular anime films and series at all, you probably already know that previewing anime prior to sharing it with your children.  That said, it's an enjoyable enough sci-fi yarn that will be a good weekend diversion, if a bit of a letdown at the end.  If you're into anime and you have a Netflix Instant subscription, you can do worse than Tokko.
Posted by MetalFRO at 6:51 PM No comments:

Album of the Moment - Fu Manchu's "The Action is Go" 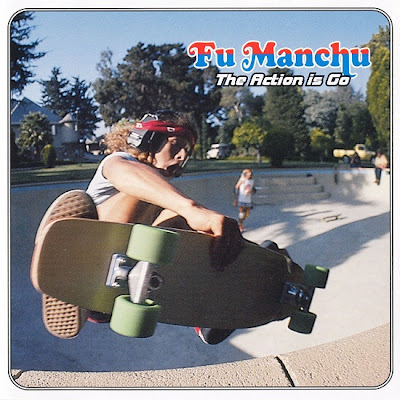 Some music collections are ever-changing, as tastes change or trends come and go.  Most people have short attention spans when it comes to music, save for a handful of favorite bands/artists, a few favorite songs, or perhaps a lone favorite album that they have an emotional connection to.  I, on the other hand, have a largely static collection that merely grows with my ever-expanding tastes and with time.  If I don't like a CD I don't generally get rid of it unless I'm hard up for cash, and that has only happened a couple times.  In 2004, I was hard up enough for cash that I ended up selling off some 200 of my then 600-CD collection.  Shame, really, as many of the CDs I sold off were excellent, and a couple of them will cost me a pretty penny to replace at some point.  One of the discs I regretted selling for so long was Fu Manchu's 1997 gem "The Action is Go".  It's still the only Fu Manchu release I ever owned, but only because I was afraid perhaps their other material wouldn't match up to this album.

So I recently re-purchased this, still sealed for just under six bucks, which I thought was a fantastic deal.  Listening to this again, it's as engaging and enjoyable as I remember it.  Fuzzed out guitar tone that belies the heaviness of the whole thing with driving riffs in some songs, while others have this lackadaisical tempo and tone to them that it feels like just a bunch of guys chilling out while rocking out.  Their music is deceptively simple, in many respects.  Lots of riff repetition, choruses that repeat themselves, or key bits in each song that are easily grasped hooks you can sink your teeth into.  There's a sense of dynamics at work here, however, that is perhaps less obvious at first, or on casual listens.  It's not quite as immediate as the loud-soft dynamic that Nirvana perfected, but along those lines.  Fu Manchu makes their shift in dynamics less polarized, so they don't appear to be quite as "dynamic" in nature.  But rest assured, these guys know what they're doing - they know exactly the kind of song they're writing when they've sparked your interest just enough to reel you in completely by the time the slightly more muscular chorus kicks in and you're tunelessly singing along.

The thing about Fu Manchu is that it's a formula that shouldn't necessarily work but does.  Vocally, this stuff is fairly a-tonal.  Not all of it, but I've heard hardcore punk bands with more melodic sensibility in the vocal lines than this stuff.  But Scott Hill's semi-sung, semi-yelled vocals have a sort of charm to them, so they're engaging nonetheless.  The fuzz guitar tone is fantastic, and though this band belongs to the "stoner rock" genre based on their style, the lyrics of this album belie any substance references in the lyrics, and musically they owe as much to early hardcore punk as they do to Black Sabbath or Candlemass.  It's an interesting marriage of the sedate and the energetic elements of the styles they converge which makes their sound vital.

In any event, I'm glad to finally have this CD back in my collection, and will be on the lookout for a vinyl version.  I'm also interested in scoring a European copy, since that release had 2 bonus tracks which don't appear on the North American release.  This has been spinning in my van's stereo for the last week and will continue to do so for a short while until I move on to other things, but like an old friend coming to visit after years of being away, this album is a welcome visitor to my CD player once again.
Posted by MetalFRO at 12:46 PM No comments: