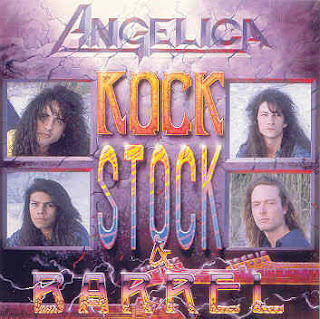 Rock Stock & Barrel is Angelica's 3rd album, and one of the 1st tapes I ever purchased with my own money. I was initially disappointed with this release for some reason. I had listened to it at a friend's house & enjoyed it, but when I brought it home, I thought the guitar tone was weak as compared to other similar bands. I also thought the production was too slick (my biggest issue w/ Walkin' In Faith some years later). I only listened to it a couple times, then shelved it.

Fast forward 1 year later & I listened to it again. What was I thinking! This album, while a bit too slick for its own good, is awesome! As far as I'm concerned, this has better, more varied songwriting than Walkin' In Faith (something that brought that album down a notch), and has a more interesting vocalist in Drew Bacca. Not only does Drew have the pipes to support these tunes, but he has a lot more personality & inflection in his delivery than Jerome Mazza ever did, which gives these tracks more personality in turn.

Because this was an early purchase for me & I STILL have it on cassette (as well as CD), this holds a special place in my heart as an early favorite. I still go back to this one as frequently as the debut, even if it doesn't have the teeth the debut has. Still, this is a great album. My favorite tracks include "The Fire Inside", "Cover Me" with it's acoustic intro & bluesy swagger, "Home Sweet Heaven" with it's interesting riff, "Keep Pushin' On" with it's high-energy, and "Rhyme and Reason" with it's awesome groove. Of course, no Angelica album would be complete without Dennis Cameron getting a chance to shred a bit, & we get that in "Bumble Boob Groove", a guitar interpretation of the classical piece"Flight of the Bumblebee", as well as an instrumental version of "Oh, Canada", since Dennis & co. are from Canada. 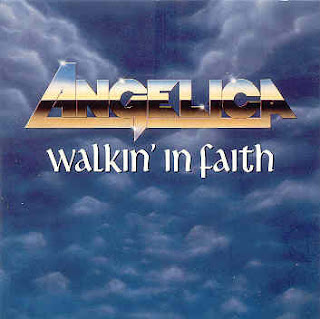 Angelica's 2nd album, "Walkin' In Faith" takes a minor turn from the debut, in that, the album has a more polished sound. That works both in the albums favor, and to its detriment. What I mean by that is this; the album sounds really good. The production is top notch, the programmed drums sound more real than most, and the guitar sound has a pristine shine to it. Also, Jerome Mazza's vocals, while not as immediately recognizable as the inimitable Rob Rock (not Andy Lyon, as printed on the sleeve), sound great on the record & fit perfectly with the instrumentation. My biggest qualm with the album is that it's too well produced. Everything has so much production that it sounds a tad sterile.

That shouldn't deter you, however, from downloading & enjoying this album. There is some great stuff to be had here. The opening title track is a great song, followed immediately by "Hold On", which has one of the most memorable riffs guitarist/mastermind Dennis Cameron has ever written. "Soul Search" has a nice hook, "Time and Time Again" brings a different meter into the picture to keep things interesting, and "Bring Into Being" just sounds great with its hooky chorus & big sound.

So, yes, compared to the absolutely rocking debut, this seems a tad subdued, & perhaps a bit overproduced. However, it's a great album in its own right, & a fine follow-up to one of Christian hard rock's best debut albums ever.

Thank you for visiting this weblog. I have set up this space on the web to pay tribute to some of the progenitors & early innovators of Christian rock & heavy metal by offering up my views & reviews of some of the music that has been instrumental (sorry, pun intended) in shaping the Christian rock & metal scene as we know it today. If it weren't for these early adopters of the style & sound, we would not have awesome bands today like Underoath, Demon Hunter, Miseration, Immortal Souls, Leeland, and more. Much of this material will come from my own CD collection, though some will come from other sources. I AM LOOKING FOR CONTRIBUTORS for this blog as well. My hope is to have reviews covering as many sub-genres of Christian rock & metal as possible well represented. I also plan on writing reviews of many new & recent releases as well to show how far the Christian music artistry has come & where it's headed.

***IMPORTANT***
Bands are encouraged to submit demos & material for review if they like my lengthy, honest review style. If a band/label wishes to submit materials for review, they can e-mail me: metalfro777 [at] hotmail dot com. I will send instructions as to how a demo or other material can be submitted.

So, there you have it...my little corner of cyberspace devoted to Christian rock & metal. I plan to cover as many sub genres as I can. I will focus mostly on music that was released on known labels, though I am open to demos & custom releases as well. Matter of fact, I will be reviewing at least 2 demos from an artist here in the coming weeks, & will be seeking out other underground material from artists that never had their material released through traditional CCM distribution channels. Stay tuned for some great stuff...I hope you like what I have to offer!
Posted by MetalFRO at 6:15 PM No comments: