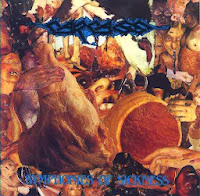 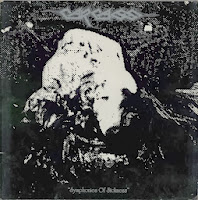 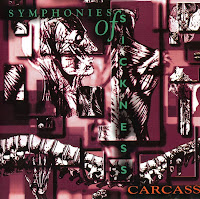 Carcass is a band that, to fans of the large umbrella known as "extreme metal", certainly needs no introduction. The band has been credited for starting at least one musical style (goregrind, via their debut, "Reek of Putrefaction"), and contributing heavily toward the start or refinement of at least 2 others (melodic death metal via "Heartwork" and the 'death and roll' style played on "Swansong").  Their 3rd record, "Necroticism - Descanting the Insalubrious", is often the subject of much praise and is generally lauded as their best, though my vote has always gone to "Heartwork" for that honor.  So with all of those accolades and recognition, one Carcass album is often forgotten, or at the very least, not mentioned in the same breath with the rest.  That's a shame, because "Symphonies of Sickness" is every bit as important as its brethren in the historical context of death metal, a style the band ultimately became synonymous with.

It seems to me that when it comes to early death metal, and the progenitors of the style, Carcass were among the most vicious-sounding and brutal of the lot.  They weren't the fastest, nor did their riffs have the tightest attack.  What they had, however, was a brilliant combination of heavy, muddy production, groove, riffing that could speed up or slow down to fit the mood being created, powerful drumming that alternated between creating cacophony and maintaining the aforementioned groove, and vocals that did more than just showcase some guy growling behind a microphone, but really set the bar for brutality and versatility within the style.  Despite all of this, "Symphonies of Sickness" is often left out of the conversation when talking about ground breaking albums at the beginning of the death metal movement, and is not mentioned alongside other brilliant records like Death's "Scream Bloody Gore" or perhaps "Leprosy", Bolt Thrower's "Realm of Chaos", Morbid Angel's debut "Altars of Madness", Pestilence's "Consvming Impulse" or early works by Obituary, Autopsy, and labelmates Napalm Death.  It should be, however; let me explain why.

In 1989, death metal was still a style in development.  The rise of death metal was inevitable, as bands like Death, Celtic Frost, and Possession had been pushing the boundaries of thrash metal for a number of years in the underground, but most of what is considered the earliest death metal is still grounded very much in thrash, like Pestilence's "Malleus Maleficarum", Bolt Thrower's "In Death There Is No Law", or even Death's debut "Scream Bloody Gore".  Many of the early records still had very much a thrash metal base, only taken to new extremes.  It wasn't until the sound became less focused on super-fast playing and precision riffs that death metal began to really come into play as its own style.  As vocals became more throat-ripping, guitars began to be tuned down, and tempos had a bit more leeway to speed up or slow down as necessary, death metal began to shed its thrash roots and become its own entity.  This can be seen with an album like "Realm of Chaos", which is every bit as punishing as its thrashier predecessor, but begins to turn up the brutality past 11, and sounds distinctly different than what came before.

Carcass wasn't born of thrash metal, however, they were forged in the fiery pits of hardcore punk, and their take on grindcore was so massive and brutal that it would have been nigh impossible to follow it up with another record as blistering as "Reek of Putrefaction".  Instead, they followed up that bullet train of an assault with something more akin to a fleet of Sherman tanks cruising down the road.  Yeah, they can still go fast if need be, but they're far more menacing and imposing than the train is, because the tank can slow way down and target something specific, or stop altogether and bring a full-on assault.  Such is the case with "Symphonies of Sickness", which takes the heavy nature of its predecessor and while turning down the speed knob, cranked the intensity and brutality knobs up to the max and broke them off in the process.  What they developed by doing so is arguably the heaviest and most insane record of 1989.

Musically, "Symphonies" is a monster.  I'm not sure how Bill Steer's guitar tone was so thick and chunky in 1989, but the band deserves some kudos for both their choice of equipment and their production technique (or perhaps lack thereof) in achieving the sound of this album.  Bill's guitar has such a grind and grit to it, completely forsaking the razor-sharp sound that thrash metal bands aim for, instead, sinking into the murky depths of what became the signature of the death metal guitar sound throughout the Florida scene.  Jeff's bass rumbles confidently alongside Bill's riffing, and often underneath his solos, giving the album a lot more weight than many of Carcass' contemporaries lacked until years later when they had bigger budgets and a producer like Scott Burns at the mixing board.  Jeff's bass sounds truly menacing with that thick, dirty and distorted tone.  Meanwhile behind the drums, Ken Owen sounds a whole lot more in control this time around. He still has a bit of fine tuning which will become evident across the rest of the band's discography, but compared to the hyper fast, barely-on-the-rails drumming of "Reek of Putrefaction", this is a lot more precise an attack, no doubt from the years of playing the "Reek" material and building up stamina, as well as a better handle on the timing needed to pull off this kind of material.  And while dynamics aren't normally something you would think of when discussing death metal, when the music slows down to groove a bit or let the song catch a quick breath before ramping up again, Ken follows suit and the drumming matches what's going on elsewhere.

Vocally, this is some pretty raw and intense stuff.  For death metal in the late 1980's, it was common for vocalists to employ a real throaty yell/scream or a mid-range growl, not unlike John Tardy of Obituary.  So the dual vocal attack of Jeff Walker's high-pitched growl/shriek and the much lower-end growl of Bill Steer was both new and exciting at this stage of the game.  Death Metal hadn't reached that stage where everyone was playing playing the vocal limbo, i.e. "how low can you go", so this kind of guttural sound was still relatively untapped, save for a handful of other bands.  Personally, I think had the band employed only Jeff's higher pitched growls, while the album would have still been unique and innovative, it would have been less so, because this kind of vocal trade-off and layering didn't become a major component in the style until better, more experienced producers came along and added the layering/overdubs for maximum effect.  Lyrically, this treads the same medical journal-infested waters as the band's debut, requiring medical textbooks and a thesaurus handy to understand all that's going on, but as most fans know, the early lyrics were all about bodily processes, such as rotting, intestinal disease & other ailments, and additional, similarly appetizing topics.  Not the stuff of emotionally charged debate, but from their vegetarian perspective, pertinent, and certainly years head of its time, culturally speaking.

The album is not without its flaws, however.  Being a self-produced album with such a dirty, grungy sound to it means that sometimes the clarity of the guitar is lost unless you're cranking it up to the max.  As such, the complexity of the riffing can sometimes be muted a bit, and the songs are a bit less memorable when you don't have those key riffs playing in your head for hours after you've spun the album.  "Symphonies" has less a problem than some of its contemporaries in this regard because it's not all about break-neck speed, so sometimes the groovier passages will stick with you a bit longer, but it's a valid concern.  As with a lot of metal albums from this time as well, the drums should be more powerful and sound larger than they are, so obviously the band didn't spend as much time in post-production adjusting the volume on the drums to bring them up in the mix enough to give them a bit more weight.  This is a minor complaint, as the drumming is generally always audible, but as compared to latter-day Carcass efforts, I'd like to be able to hear Ken more as he's pounding away.  Also, while they all sound good, many of Bill's solos are still quite primitive and show that he hadn't yet come into his own in that area.  All the solos here fit the songs and work well enough, but compared with what he provided over the course of the 2 albums that followed, his work here is a touch sloppy and almost apprehensive, as if he's afraid to cut loose too much.  When he does, it sounds good, but you can tell that the precision he later achieved was still absent.

These minor complaints are spoken in hindsight, of course, as this whole release was completely ground breaking and unprecedented upon its release in 1989.  Save for labelmates and countrymen Bolt Thrower and Napalm Death, arguably fellow European death metallers Pestilence, and quite possibly Florida's Morbid Angel, Carcass had a corner on the market in 1989 with "Symphonies of Sickness" in terms of sheer heaviness, as well as employing the unique dual vocalist approach, which gave them an element their peers lacked.  The band modified this approach with their next album 2 years later, which propelled them into legendary status within the scene, but this album should have already cemented that place on its own merits.  This is a landmark release that doesn't always get the credit it deserves in context with other albums of its time, and that's too bad, because it's a powerful statement from a group who showed the metal world that the best was yet to come, alongside a set of peers that never quite escaped the shadow of the albums they released the same year.  Essential, if not for the music alone, for the historical significance.