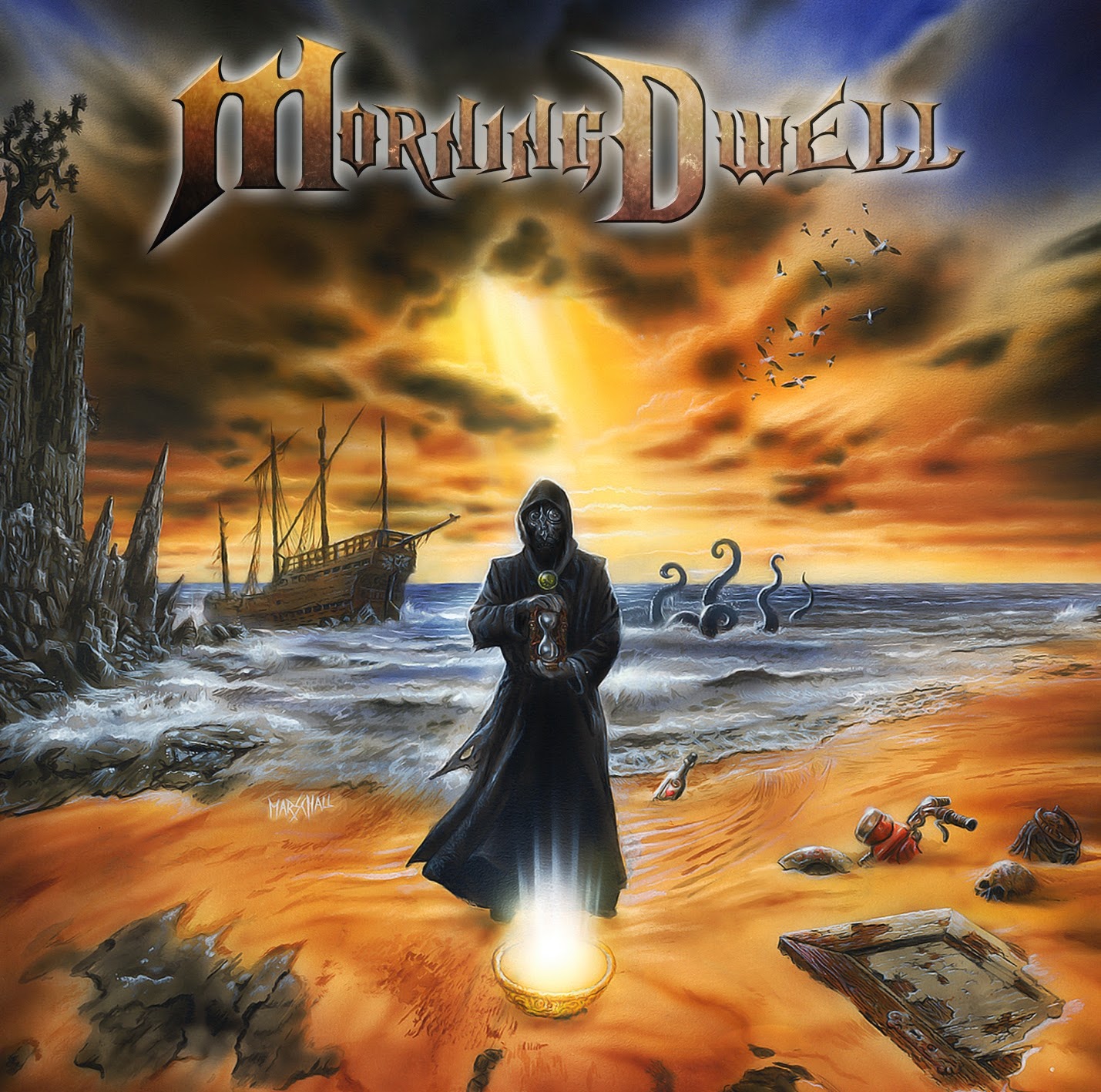 As previous reviews have indicated, the metal sub-genre known as Power Metal is hopelessly overcrowded.  Making an impression among the glut of bands is difficult.  You either need to grab folks by the throat and knock their socks off, or do something that is interesting enough to warrant their time.  In the case of a band blatantly aping their influences, they need to bring their "A" game in order to have any hope of being seen as anything other than just a copycat.  In the case of Sweden's Morning Dwell, one can say that they at least make a good go of it.

Reading through the band's bio, it's apparent that at least the man behind the group, Petter Hjerpe, has had a reasonably legitimate power metal education, having purchased Hammerfall's seminal "Legacy of Kings" album, then discovering (through his father), the wondrous "Keep of the Seven Keys: Part 2" by Helloween (on vinyl, no less!).  And as you listen to the album, you'll hear Petter's Helloween fetish in all its glory (or lack thereof, depending on your take).  The album gains credibility when you find that drummer Alfred Fridhagen (Golden Resurrection, ReinXeed) is on board, along with production from CJ Grimmark (Narnia), and artwork by Andreas Marshall.  With a formula of Helloween-worship with talented players sounds like a winning combination, at least on paper.  How does it translate on disc?  Read on!

For a band trying to ape the Helloween sound, Morning Dwell sounds about like one would expect.  The guitars have some level of crunch, but they're relatively smooth as well, with a balanced amount of grit coupled with slick production.  Michel Barréra and Ulf Zetterman do a good job with the axe work here, cranking out reasonably good riffs and solos that follow in the Helloween tradition, but lacking some of the fire that made the "Keepers" albums so special.  Still, they play well, and get the job done.  Bass is present and audible, though Martin Erneström generally just keeps pace with the guitar in terms of what he's playing.  He is solid and in the pocket, and provides a nice underpinning for the guitar.  I do like that there's a real separation of guitar and bass, which isn't always the case with modern metal production.  And of course, drumming by Alfred Fridhagen is spot on, with his usual skill and energy.

Petter Hjerpe is a relatively new vocalist, as outlined in the band's bio, so don't expect to hear the next power metal wunderkind when listening to the album.  He's relatively solid, with some minor range issues.  He also has what I'll call a minor "transition" issue, where when he's sliding from one note to another, his voice squeaks a bit, not unlike puberty.  This generally happens only at the top of his register, and it's not all the time, so it's somewhat forgivable, but it's still a noticeable flaw.  It's interesting to note that Petter had some vocal coaching by producer Frippe Eliasson.  Again, this is another reason the minor issues with vocals can be seen as less of a detriment to the album's impact.

The more troublesome aspect of the album is that the songs just aren't that memorable.  They contain all the elements one would expect, and they're fun to listen to while the album's playing, but other than the chorus of "Unlock All the Doors", or perhaps bits of "The Pirate Song", none of the material sticks around in my head after the album is done playing.  It's not inherently poorly written, per se, but the hooks just aren't strong enough to keep me engaged beyond the listening experience.  That, combined with the vocal issues I mentioned, will keep this release from blowing up the way the band might want it to.  Still, with as much Helloween worship as is going on here, and the fact that there's plenty of potential on display, Doolittle Group may have scored a minor coup by signing the band, because with time, writing, and touring, they can only get better.  They don't have a "Keeper" album here (sorry, pun intended), but it's a solid, inoffensive slab of power metal that is at least enjoyable to listen to.  Recommended for Helloween nuts and absolute power metal devotees; all others try before you buy.