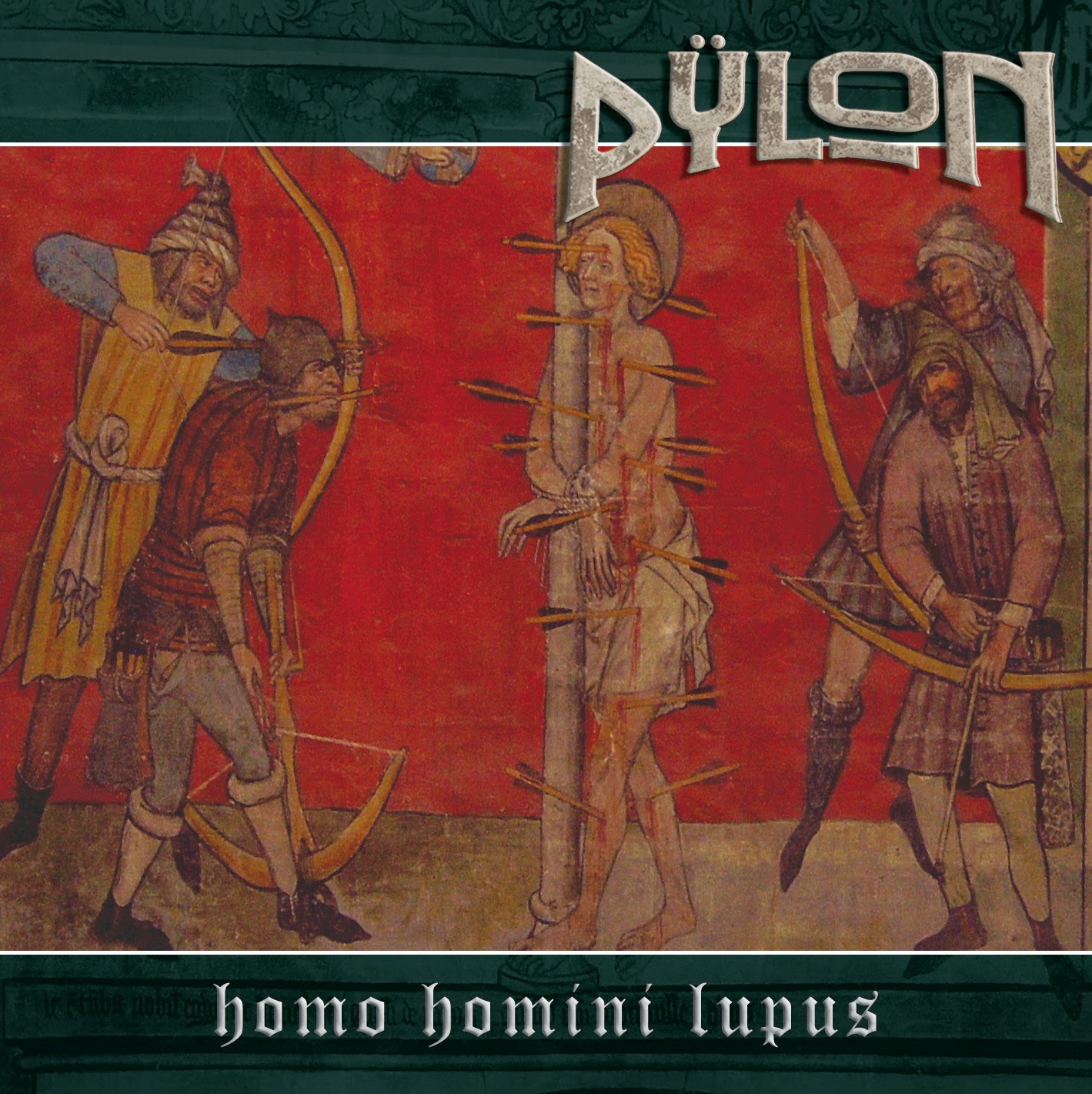 Pylon has made a name for themselves in the Doom Metal space over the last several years.  Beginning in 2004 with "Natural Songbirth", the band's 5 full-length releases and 2 splits (one with the mighty My Silent Wake), Pylon come to 2014 with their 6th LP, "Homo Homini Lupus".  That's Latin, loosely translated as "man is a wolf to [his fellow] man", which I would have to agree with.  Man is oft a cruel beast, and as people we are frequently self-centered, narcissistic, and tend to ignore the feelings and needs of others, if it conflicts with our own interests.  I have to admit I'm as guilty as the next person of such behavior, and it makes me reflect on my life when I think about what kind of impact I'm having on the world.

I reviewed Pylon's last release, "The Harrowing of Hell" last year, and found it to be a solid, if somewhat uninspired release.  Pylon has made some changes to their line-up and sound, and I think those are for the better, because "Homo Homini Lupus" is a quality album that I think reflects the kind of growth a band should see when they really put the effort into writing material from one album to the next.  One of the things that "The Harrowing" needed desperately was stronger songs.  "Homo Homini Lupus" rectifies this quite a bit by having a nice mix of material, and more interesting and catchy songs.

On the instrumental front, the guitars sound a LOT better here than they did on the previous release.  The CD release of "Harrowing" had a couple bonus tracks that hinted at the improved sound, and here it's even better.  Gone is the tinny, thin tone, and in its place is a thick, warm, crunchy tone that is far more befitting of the doom metal here.  The guitar production is improved all around, as clean tones sound much better as well, so kudos to whomever produced the album, because it sounds so much better.  Bass is nicely placed in the mix, with a full sound that rumbles and provides a lot of low end.  It doesn't get lost in the mix, and while not blazing a unique path within the music, at least sounds great throughout.  Drum work is pretty good as well, keeping time with the shifting tempos from song to song.  The cymbals are a touch buried in the mix, but the bass and snare drum sounds are all punchy at the right level.

Vocally, the addition of Jordan Cutajar from Nomad Son was the right move.  Matt Brand was a serviceable vocalist, but this change really gives them a leg up, because Jordan sounds at home here as much as he does with Nomad Son.  His strong voice and raspy, emotive tone are a welcome addition to the Pylon sound, especially with the improved production.  Jordan's inflections, passionate delivery, and attitude all come through, which gives the material that much more weight.  The addition of some Hebrew and Latin in the lyrics also spices things up.

I like the material on this album a lot more than on its predecessor.  Firstly, the songs shift tempos more and the moods change throughout, which keeps things fresh and interesting.  The choice of Slayer's "South of Heaven" is also a great one, as I think the band brings their own little element to the song and do it justice.  In addition, the songs themselves are just stronger than the previous release, because they don't get old on repeat listens, and when I go back to the album after not having listened to it for a few days, I immediately know where I'm at with each song and find myself smiling and bobbing my head with the groove.  Overall, this is a quality album that, while relatively short (just shy of 37 minutes if you don't count the cover), is a marked improvement over the previous release.  If you've not checked out Pylon before, do yourself a favor and jump on the bandwagon now, because this album shows they've got the chops and songs.  Fans should eat this up, and doom fans in general should enjoy this fairly thoroughly.  Recommended.