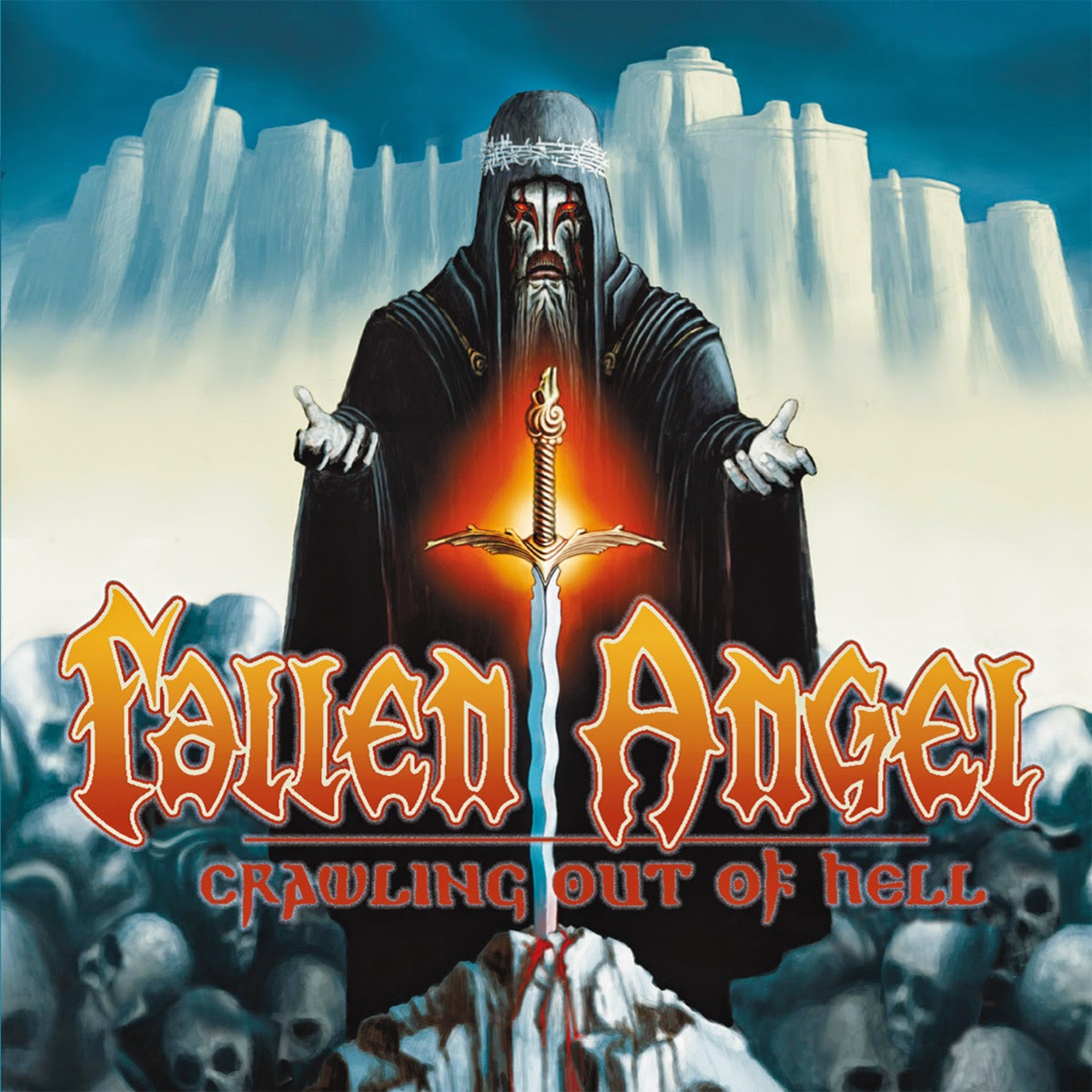 Traditional heavy metal has had a bit of a resurgence in the global music scene in recent years.  Anyone who has paid attention to trends in metal over the last 20 years or so knows that power metal has enjoyed a long, relatively healthy surge in popularity ever since bands like Hammerfall, Rhapsody (et al) and Blind Guardian have made the style more popular again, along with somewhat newer sensations like Sonata Arctica, Kamelot, Firewind, and Evergrey.  But more traditional "heavy metal" has stayed a bit more underground, toiling in relative obscurity through the last 2 decades.  More recent bands like 3 Inches of Blood, Wolf, and White Wizzard have exemplified the return of the genre's core sound at some level of commercial significance in the modern age.  With any resurgence in a classic sound takes place, there will be casualties; bands who simply don't have the talent to make an impact, despite having the right ingredients in the formula.  Thankfully, Fallen Angel is positioning themselves to avoid that pitfall.

Fallen Angel is an interesting band, consisting of 5 individuals who use pseudonyms instead of their real names.  All the band members paint their faces and clothe themselves in a manner vaguely reminiscent of King Diamond.  They also play a style of heavy metal that reeks of that King Diamond, Mercyful Fate kind of early speed/power metal, without the usual trappings of the European power metal set.  A more modern comparison would be Iced Earth, though they're definitely not clones.  Their music has a real early-mid 1980's throwback feel to it, in a good way.  Utilizing modern production techniques without sacrificing the classic sound and feel, Fallen Angel have struck a good balance between staying true to the genre's roots and bringing a modern touch to the style.

Musically speaking, the band has really solid and energetic performances that showcase some degree of range.  Guitars provided by "The Man In Black" (aka Robb Lotta) and "The Dark Lord of Democales" (aka band mastermind John Cruppe) are very well done, and hearken back to a bygone era of metal where the performances oozed passion and energy.  The guitars are heavy and crunchy, and have some real presence to them, without the overly bass-heavy tone you would expect from a modern metal album.  So while the album sounds modern because of the production, the guitars don't sound like they were played through a bass amp and recorded through a vocal mic membrane.  Guitar solos are excellent throughout, with loads of energy, but without forsaking a melodic sensibility.  They are just what you would expect from a band playing a style of metal that recalls the genre's glory years.  Bass guitar is also suitably present but not so high in the mix it overpowers everything.  It sounds good alongside the guitars, and works especially well during acoustic and/or clean guitar sections where it provides the right amount of weight underneath.  Bass is provided by Sodominous - The Lord of the Flesh (aka Joe Surace, recently replaced by Bob Embury).  Drumming by "The Darkness" (aka Frankie Quaggs) is quite well done as well.  He has a real sense of dynamics, and knows when to go full-blast versus when the songs need something more nuanced, and when to change that up within the song.  A good example of that would be transitioning from the verses to the chorus in "Sad Wings".  All in all, the instrumentation on the album is very well done.

Vocals are provided by Caleb - The Teller of Tales (aka Steve Seniuk).  I'll get it on the table right away so folks can make their judgments, as I'm sure they will: Steve sounds an AWFUL LOT like former Iced Earth vocalist Matt Barlow.  He's not a copycat, because his slower passages and screams differ a fair bit, but his mid-range to high vocals sound more than a little like the famed singer.  Of course, Matt himself often bore more than a passing resemblance to Paul Stanley, so take that as you will.  Personally, I think he sounds great on the record, with impassioned screams, suitably dynamic quieter passages, and loads of emotion in his delivery.  He sings the lyrics convincingly, and really conveys that he cares about the story being told within the album.  If you're a fan of any of the recent Iced Earth vocalists, i.e. Matt Barlow, Tim "Ripper" Owens, or Stu Block, you'll feel right at home with Caleb, er, Steve's vocal work.

Speaking of story, apparently this album is the 1st in a trilogy of concept albums that follow along with related novels.  I wish I knew what novel(s) this trilogy is based upon, and whether it's a work of fiction by Cruppe himself, or another series of novels already out there.  While I didn't have a lyric sheet or copy to go by, the lyrics themselves aren't hard to discern.  The story is one of war and sacrifice, and the protagonist seems to go through a lot of emotional turmoil as a result of all the chaos.  The album's multitude of segue tracks are apparently also integral to the story within the album, as they're based in some fashion on the story being told, as much as instrumental interludes can be.  Being able to read the novel might help give me additional context based on the titles of those tracks, or where the story is moving in between the main narrative from each song with lyrics.

Other reviews have stated that the album is a bit too "busy", and while I can see that, I don't know that I necessarily agree.  Yes, there is dual-guitar action, often with dueling solos or layering, and there are various keyboard effects and accouterments here and there, as well as a handful of sound effects to aid in presenting the story, but I don't think those things are very obtrusive.  If anything, listening via headphones gave me a bit more clarification as to the context of some of those sounds, but the experience was quite similar to that of jamming the album through my desk speakers.  I initially thought the mix was a bit weak, but after several listens, I believe it perfectly suits the sound the band is trying to achieve.  Some have said that Steve screams too much and relies on that too heavily, but if you compare what these guys are doing to Iced Earth or Mercyful Fate, you'll find that they're quite similar and in that context, I don't believe it's overdone.  Most criticisms I've read of the album focus on these items, along with the inclusion of too many interlude tracks.  I was initially put off by them, and found them distracting, since they don't all perfectly transition one track to the next, but upon multiple listens, they make sense within the framework of the album and now I think I'd miss them if I nixed them from the album playlist.

I was quite surprised, and honestly taken aback at the sheer quality and force of "Crawling Out Of Hell".  The musicianship is top-notch, the performances are all spirited and high quality, and the idea of a trilogy of concept albums, while not entirely original, is not something that has been done before in metal, at this level.  The songs all have catchiness and staying power (with the possible exception of the repetitive "On and On") that makes for good replay value, and ensures that many of the tracks will be playing in your head long after the CD has stopped spinning.  Killer Metal Records has done quite a service to metal fans everywhere by re-issuing this album, originally self-released by the band in 2010.  I would love to see a vinyl issue of this release as well.  I look forward to the album's forthcoming follow-up, "Crawling Out Of Heaven", and wish guitarist/band leader John Cruppe a full recovery from his recent health issues, which you can read about on the band's Facebook page.  Highly recommended!

To the reviewer, the novels are written by guitarist John Cruppe and I was able to order one directly from the band along with other stuff they sell as well. I love playing their stuff on Rock Band too. all their songs are on there and can be played.